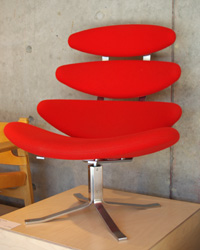 Poul M. Volther (1923-2001) was a Danish furniture and lighting designer. Volther was first trained as a cabinetmaker, and he would later go on to graduate as an architect from the Copenhagen school of Arts & Craft in Copenhagen (København).

Poul Volther belonged to a generation of Danish architects and Designers who had solid roots in quality craftsmanship. Volther was part of a very influential group of Danish designers who valued functionalism above all else. He was against fads and trendy arrangement, but he loved simple practical designs manufactured out of fine materials.

Volther would become a teacher at the Copenhagen school of Arts & Craft. As a teacher he would go on to influence hundreds of future furniture architects and designers desire for quality craftsmanship.

Through his close friend and colleague Hans Jørgen Wegner, Volther was hired by FDB´s design studio in 1949. The famous Danish designer Børge Mogensen was head of the FDB design office at the time. Over time Volther would proof his worth and he was made the head architect of the design office. While he was head of the design studio he sketched several important chairs for FDB (Tremmestol). This special wooden chair (Tremmestol) project was started by Børge Mogensen, but Volther simplified the chair designs giving them a greater sense of style and grace.

Simultaneously Volther was creating some his best known chairs and couches, many of which are still in production today. Many of his furniture designs from this period can still be found in thousands of homes throughout Denmark, and they are in practically every hotel in Denmark.
In 1964 Poul Volther would create his most famous design when he designed the beautiful ‘Corona Chair’. The chair was manufactured by Erik Jørgensen. The chair’s name comes from the corona of the Sun, which is the outer layer of the Suns atmosphere. There is no doubt that the ingenious name ‘Corona’ had an impact on the chairs success. Keep in mind that the chair was released in the mid-1960’s which was right in the middle of the ‘space race’ between the United States and the Soviet Union. However, the chair was much more than a clever name. The chair is quite simply beautiful. The design is timeless and it is as modern today as it was when it was created over 40 years ago. Not only is the chair beautiful it is extremely comfortable for the human body. Too often pieces of designer furniture are not nearly as pleasing to sit on as they are to look at. The ‘Corona Chair’ is an exception to this rule, however pleasing the chair is to look at it is much more comfortable to sit on. Any designer would be proud to call the ‘Corona Chair’ their crowning achievement. The frame of the chair is made of chrome, and each piece of chrome is covered with oval pieces of fabric, which are made of either wool or leather.

Oddly when the chair was first released to the public it was perhaps a little too bold in the eyes of the Danes, and the chair didn’t sell well in the beginning. However, in the United States and the chair was loved from the first day it became available. The ‘Corona Chair’ was without a doubt very advanced for its time, and this could explain why the Danes were a little slow to accept the chair. In some ways the chair is more at home today that it was when it was released to the public.
The ‘Corona Chair’ lived its life in the shade for the next 20 years never achieving the enormous recognition it deserved. In 1984 the chair was once again presented to the public at a furniture exhibition in Cologne, Germany. The press liked it, but the audience was still not convinced. During this period Volther continued to design furniture for different furniture manufactures. All of his designs maintained his functional, simple style. He wanted his designs to be user friendly and comfortable.

In 2002 the ‘Corona Chair’ was a silent participant at the EU Top Meeting in Copenhagen. Unfortunately Poul Volther only experienced the early beginnings of the huge breakthrough for the ‘Corona Chair’. Volther passed away in 2001 before the Corona Chair became a tremendous success worldwide.

The ‘Corona Chair’ has received worldwide recognition, and there is one on display in the majority of the significant modern art museums throughout the world.