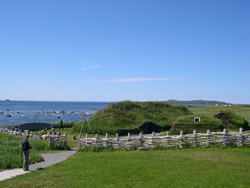 The Norse settlement at L'Anse-aux-Meadows located on Newfoundland's northernmost tip is the only sure proof of the presence of Vikings in North America. Archaeologists have determined that the site was occupied by Norse Vikings for a short period approximately 1000 years ago. The site pre-dates Christopher Columbus’s ‘discovery’ of North America by some 500 years.

The L'Anse-aux-Meadows site was discovered in the early 1960s by the Norwegian polar researcher Helge Ingstad, and his archaeologist wife Anne-Stine Ingstad. They both wanted to investigate the story of Leif Eriksson’s discovery of Vinland. They were convinced that the prevailing wind and currents would have brought the vessels from Greenland to this part of the Newfoundland coast. The story is described in two of the Icelandic sagas (Saga of the Greenlanders and the Saga of Eric the Red). Both these Sagas describe the experiences of Norse Greenlanders who discovered and attempted to settle lands west of Greenland. These lands are known as Vinland.

The Sagas attribute the failure of the settlement due to conflicts within the community and conflicts with the ‘Srælings’, who were the natives of the region. The study of L’Anse-Aux-Meadows found 8 turf houses that unmistakably resembled the Norse buildings in Greenland and Iceland. The houses are believed to have been constructed of sod placed over a wooden frame. The largest building measured 28.8m by 15.6m, (94.5 ft by 51ft). Other finds include an iron forge, carpentry workshop and a spot which was clearly used to repair boats. Everyday Norse items such as a whetstone, bone knitting needle, spindles, and a stone oil lamp show clearly that this was a Norse settlement.

Many archaeologists believe that the L’Anse-Aux-Meadows site is not the Vinland described in the Sagas, but was merely a winter settlement. The most striking evidence to support this claim is that remains of butternuts which have been found on the site. Butternuts are a species of walnut which are not native to Newfoundland. They only grow further south on the North American mainland. This suggests that the Vikings settlers may have travelled further south along the North American continent.

L’Anse-Aux-Meadows was named a World Heritage Site in 1978.