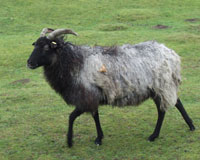 Most Vikings were farmers. Even those who were involved in the raids all over Western Europe, or those who sailed East or West to trade were at heart farmers. These Viking raiders and traders would generally still come home with their profits or with their stolen goods to operate their farms. Considering that most Vikings were farmers it is quite odd that we know so little about their farming practices.

Most of our farming knowledge comes from Denmark which has the most land suitable for growing. Most of the excavations of Viking Age farms have been done in Denmark. There are also several known rural sites in central Sweden. We know that crop farming was important in central Sweden. We know very little about the crop farming which occurred in Norway. We do know that farming in Norway was limited to the south of the country.

Wehave also established that the main cereal crops in Viking Age Scandinavia were barley, rye and oats. There was also a little bit of wheat farming in Denmark. Wheat was not common throughout the Viking World. That being said there have been a handful of discoveries of  wheaten bread discoveries in the burial mounds in Birka, Sweden, but there has been no evidence to show that this wheat was grown locally. It could be that wheat was considered a luxury good to these Vikings.

Other important crops were peas, beans, root vegetables and cabbages.