Home > The Vikings > Who were the Vikings?

Who were the Vikings? 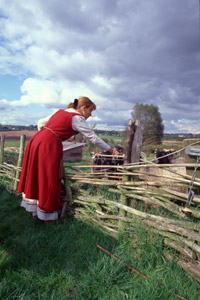 A Viking is one of the Norse (Scandinavian) explorers, warriors, merchants, and pirates who raided and colonized wide areas of Europe from the late eighth to the early eleventh century. These Norsemen used their famed longships to travel as far east as Constantinople and the Volga River in Russia, and as far west as Iceland, Greenland, and Newfoundland. This period of Viking expansion is known as the Viking Age, and forms a major part of the medieval history of Scandinavia, the British Isles and Europe in general.

The period from the earliest recorded raids in the 790s until the Norman Conquest of England in 1066 is commonly known as the Viking Age of Scandinavian History.

It should be noted however that The Normans who invaded and conquered what we now call England at the Battle of Hastings in 1066 were descended from Danish Vikings who were given feudal overlordship of areas in northern France — the Duchy of Normandy — in the 8th century. In that respect, descendants of the Vikings continued to have an influence in northern Europe. Likewise, King Harold Godwinson, the last Anglo-Saxon king of England who was killed during the Norman invasion in 1066, was descended from Danish Vikings. Many of the medieval kings of Norway and Denmark were married to English and Scottish royalty and Viking forces were often a factor in dynastic disputes prior to 1066. In many respects the story of the Norman invasion is one of internecine warfare.

Generally speaking, the Norwegians expanded to the north and west to places such as Ireland, Iceland and Greenland; the Danes to England and France, settling in the Danelaw (northern England) and Normandy; and the Swedes to the east. In fact the name "Russia" is derived from the Swedish Vikings who were referred to as the Rus. In many ways it can be challenging to identify specific details of the Viking influence as they tended to become "absorbed" into the lands they conquered. The Rus transitioned into a Slavic culture. The Normans became "English".

In 2000, the PBS in the United States presented a two hour feature program called "The Vikings". Visit the site