Aalborg - Things to See and Do Part 2 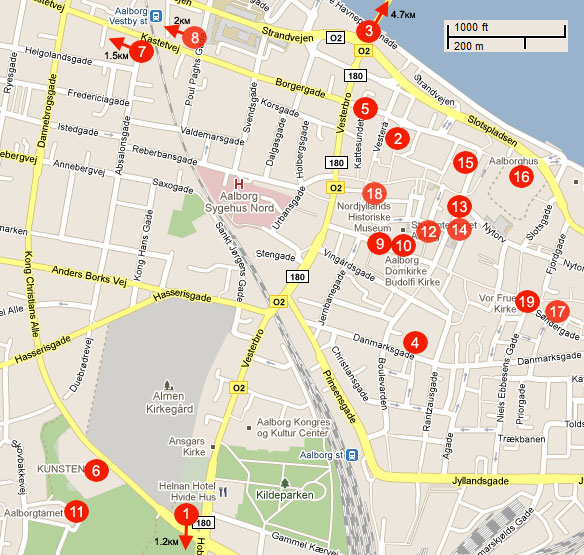 11. Aalborg Tower (Aalborgtårnet). The Aalborg Tower is quite simply an architectural monstrosity. However, it does offer a wonderful view over Aalborg and the Limfjord (Limfjorden). The platform is 105 meters above sea level. There is also a restaurant in the tower where you can enjoy a great meal with a great view. The tower is located on Sdr. Skovvej 30.

12. The Old Square (Gammeltorv). Aalborg’s Old Square was a originally a marketplace which was landscaped in 12th century, and it is the oldest square in Aalborg. The square is the home to several impressive buildings, particularly the old City Hall, which is a beautiful baroque building from 1762. During the Middle Ages the square was where criminals would be displayed and punished in front of the public. There is a granite obelisk at the centre of the square, which was known as the 0 kilometre stone. The distance of every route going out of Aalborg was measured from this stone.

13. The New Square (Nytorv). Nytorv in Aalborg was originally landscaped in 1604. The square is a crossroads where Nytorv meets Østerågade. There are many impressive buildings in the area especially the Jens Bang Stenhus. Unfortunately, the square is not closed to cars, so it can’t really be considered a great square. However, there are many restaurants and there is decent shopping in the area.

14. Jens Bangs Stone House (Jens Bangs Stenhus). You will hardly find another family home in all of Northern Europe which is larger or more splendid decorated than this stone house. The house was built in 1624, and one glance makes it very obvious that the only the best craftsmen were employed in the building of this extraordinary house. For more than 300 years a pharmacy has been located on the premises making it the oldest pharmacy in Aalborg. Those with an interest in architecture should definitely have a look at this impressive building.

15. Jorgen Olufsens Farm (Jørgen Olufsens Gård). Jorgen Olufsens farm is located on Østerågade 25. This beautiful merchant's home was built in 1616. It’s a stone house with a timber-framed wing, which is being referred to as The Hamburg Farm (Hamborg Gården). The stone house’s tall staircase is beautiful decorated. The house is named after the cities mayor from 1608 to 1625. The home is considered to be the best preserved merchant’s home in all of Denmark. Jorgen Olufsen was the half brother of Jens Bang, who was another prominent merchant during the same period. Jens Bang’s house can be viewed a little further down the street at Østerågade 9. Jorgen was the mayor of Aalborg from 1608-1625, however he had to leave office due to a huge tax evasion scandal.

16. Aalborg House Castle (Aalborghus Slot). Aalborg House Castle is hardly what one would consider to be a castle. It much more resembles a stately home. The castle was a so-called “accounts castle”, and it is the only remaining castle of its kind in Denmark. The role of the castle was to report the income results for the entire county to the King. The castle was the home of the vassal, and later on it was the home of the man in charge of all of the county authorities. The castle was built between 1539-1555 by King Christian the 3rd. The castle and some of the surrounding areas are open to tourists. During the summertime visitors have access to the dungeon and the underground tunnel system.

19. Church of Our Lady (Vor Frue Kirke). The church was originally a monastic church from the 12th century; however the only thing remaining from that period was the church tower. That was until the entire church was torn down in 1876. The Romanesque style church you see today was completed in 1878 by J.E Gnudtzmann. The church is hardly a must see for tourists although the church does house a beautifully carved pulpit from 1581.

Aalborg - Things to See and Do (Part 1)
Aalborg - Main Page