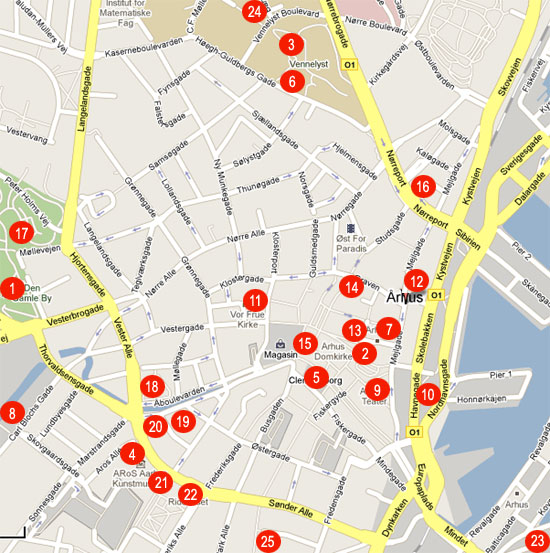 11. The Church of Our Lady (Vor Frue Kirke). The Church of Our Lady (Vor Frue Kirke) in Aarhus represents the only remaining wing of a 12th century Dominican Monastery. The south wing was transformed into the church you see today. The frescos inside the church are from the 13th and 15th centuries. The church was originally known as St. Nicholas' Church (Skt. Nicholas Kirke). However, King Christian the 3rd of Denmark (Christian 3.) changed the name when he decided that the surrounding buildings, which were formerly a priory of the Dominicans, should function as a hospital for the sick and poor. The Church was subsequently granted congregational privileges, which officially made it a centre of clerical activities in the Aarhus area.

12. Mejlgade and Skolegade Streets (Mejlgade og Skolegade). These two streets are where the rich grocers of the town used to live and conduct business. The house numbered 19 on Mejlgade street is the oldest house in Aarhus. The house is called Thestrups House (Thestrups Hus) and it was built in 1625. Several other notable houses are number 52-54, 43 and 45. The house number 46 was built in 1811 and belonged to Bagge Lihme. This house is without question one of the most beautiful and well-kept houses in all of Aarhus. Today the houses are mostly used as offices, but there are also some interesting shops and cafes. On the street ‘Skolegade’ behind the Aarhus Theatre (Aarhus Teater) are many interesting restaurants and pubs. This short street also contains several old timber framed homes.

13. The Large Square (Store Torv). This square in front of the Aarhus Cathedral. In the old days this square was used by the people for entertainment, to sell food and a host of other social activities. The spire of the Cathedral dominates this square. The decorative façade on the former Hotel Royals building is what you would expect of a world class hotel. However, the building is no longer used as a hotel, today it is used by the Nordea bank. In the square there is a 20 meters long water dragon sculpture which was designed by Elisabeth Toubros in 2003.

14. The Mound - Embankment (Volden). Street names like The Mound – The Embankment (Volden), and The Moat (Graven) are all that is left to remind you of the large protective mound the Vikings built around the city of Aarhus. Today the Mound is gone and it has been replaced by an evocative neighbourhood with many narrow paved streets. These streets are loaded with special stores, restaurants and cafés. Part of the old mound is now a neighbourhood located behind the Aarhus Cathedral, and it is called The Latin Quarter (Latinerkvarteret).

15. The Ford (Vadestedet). Vadestedet is also sometimes called ’Immervad’ and it is one of the oldest regions in Aarhus. Vadestedet is essentially a waterway which once ran through the city. There was once an old bridge which crossed the river that was called The Royal Army Road (Kongelig Hærvej). For centuries Aarhus Stream (Århus Å) was hidden under the streets after it had been covered over. However, in 1990 a huge renovation was undertaken to bring the stream back into the light. The renovation was undertaken to help beautify downtown Aarhus. Today The Ford (Vadestedet) is one of the finest social areas within the city. The entire area around the Aarhus Stream is littered with pubs, bars, cafes and restaurants. On weekends the area is a popular place for younger people.

16. Aarhus School of Architecture (Århus Arkitektskole). The twentieth century was dominated by Danish architects and designers. It is surprising that such a small country produced so many memorable building and furniture items. The Aarhus School of Architecture helped in educating many well known Danish Architects and Designers. The school finds its home in a former farm building of the wealthy grocer Hans Raaes. This elegant building was built in 1798. The entrance door of the building is surrounded by a portal made by the sculpture Jens Hiernø (1748-1801).

17. Botanical Garden (Botanisk Have). The Botanical Garden in Aarhus is one of the oldest and biggest parks in the city. The Garden was originally built in 1873. The Garden is also the most visited park in the city because it is so versatile. In the Garden you can experience exotic plant from all over the world in the Garden’s greenhouses. You can also study a great number of more regional plant collections. The Garden contains 3 lakes and numerous small streams. The garden is open year round.

18. The Mill Park (Mølleparken). The Mill Park was built in 1930. The park contains the Main City Library (Hovedbibliotektet) which was built in 1934. Across from the Library is the city’s huge activity house simply called, “The House” (Huset). Guests to ‘The House’ are welcome to try their luck in the open wood and ceramics workshops. Children are particularly known to get a kick out of these workshops. The House has the Voxhall concert stage which has regular musical and artistic performances.

19. Aarhus Art Building (Århus Kunstbygning). The Danish architect A. Høegh-Hansen designed this building in 1917. The building has been expanded and altered several times. The most notable expansion was done by the world famous Danish architect C.F. Møller. The Art Museum has many temporary art exhibitions and it has one of Denmark’s biggest exhibitions of contemporary art in their permanent collection. The museum covers all fields of art, from painting and sculpture to photography, film and video.

20. Western Avenue (Vester Allé). The street Western Avenue (Vester Allé) in downtown Aahus in known to be one of the wealthiest streets in the city. Many large businesses and important city buildings are located on this street. For those with an interest in architecture there are many impressive buildings along this street. The huge buildings have a clear intent which is to express power and authority. Notable buildings are: ‘The Business School’ (Handelsskolen) which reflects the rationality of the business world. ‘The Courthouse’ (Domhuset) which expresses power and discipline. ‘The Business Archive’ (Erhvervsarkivet) has many well sculpted owls placed along the gutters of the building. Realkredit Danmark, which is a solid financial institution and one of the strongest banks in the country.