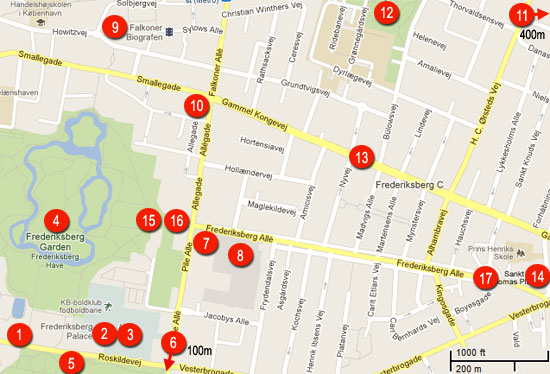 9. Solbjerg Church (Solbjerg Kirke) First built in 1908 by the architect Kristoffer Varming is a fairly typical Danish Lutheran church from the period. The church suffered a devastating fire in 1983, and the interior had to be completely rebuilt. Outside of the church is a police station from 1919 and a fire station from 1932, both built according to plans by architect Hack Kampmann.

10. City Hall (Rådhuset) Frederiksberg City Hall was built in 1953. Visitors are welcome to climb the stair to the top of the 60-meter-high tower to enjoy a great view over Frekeriskberg. In the main square stands sculptor Anker Hoffmann (1904-1985) fountain sculpture from 1960. Behind the town hall there is a large flea market every Saturday from April to October.

12. Agricultural College - Veterinary School (Landbohøjskolen - Veterinærskolen) was founded in 1773 in Christianshavn, but moved to Frederiksberg in 1859 after a large complex of buildings were completed. The original architecture was done by another famous Danish architect M.G. Bindesbøll. The complex was expanded in the 1890’s in order to fulfill growing demands for space. The beautiful gardens and parks surrounding the building is one of the city's small oases.

13. Old King's Road (Gammel Kongevej) is the location of the original road to Frederiksberg from Copenhagen. The history of the road dates back to the Early Middle Ages. Today Gammel Kongevej is the best shopping street in Frederiksberg.

14. Vaernedamsvej (Værnedamsvej). Evocative street and common place for tourists to relax while in Frederiksberg and soak up the culture. There are many good cafes as well as butchers, fishmongers, greengrocers, bakeries and cheese shops.

15. The Royal Horticultural Society Garden (Det Kongelige Haveselskabs Have). This royal garden was originally laid out in 1884 with flower beds and many winding paths. Fundamentally it is a part of Frederiksberg Palace, however it gives visitors a sense of how the original garden would have appeared. In the summertime the royal garden has regular outdoor concerts.

17. St. Thomas Square (Sankt Thomas Plads) is the beautiful, dignified entrance point into Frederiksberg from Vesterbrogade. The wide street and wide open square was originally built in 1704 as the king's private road leading up to Frederiksberg Palace.