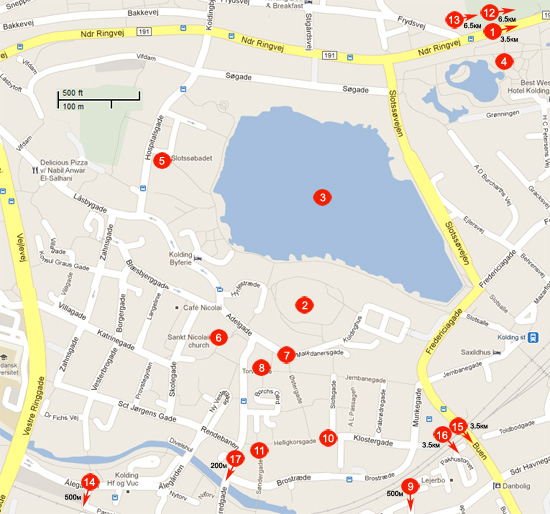 9. Urban Regeneration (Byfornyelse) is small section of Kolding located on Hollændervej. It is the site of an exciting organic urban regeneration experiment. During the 1960’s the decision was made to attempt to build an energy efficient, more environmentally neutral area of Kolding. The project consists of over 40 buildings with 129 apartments and 6 business facilities. A measurement system was designed to reduce the energy consumption with the use of heat, water and electrics. All building materials for the project came from torn down buildings in the area.

10. Holy Cross Street (Helligkorsgade) is part of the main walking street area of downtown Kolding. Helligkorsgade has some beautiful examples of old timber-framed houses. The oldest house which is also the oldest building in Kolding is located in number 18 and was built in 1589. Number 16 was built in 1632. The house number 5 has a canon ball sitting in the façade which came from the bombing of Kolding in 1849.

12. Hotel Kolding Fjord (Hotel Koldingfjord) is located at 154 Fjordvej. This Hotel is one of the most impressive buildings in the area. Naturally as the name suggests the hotel is located right by the water on Kolding Fjord. The building was originally constructed as a Christmas Seal Sanatorium in 1907. The entire financing for the building came from the purchase of Christmas Seals. With the purchase of a Christmas Seal a little money was set aside for the construction of the building. From 1911–1960 the building was used as a sanatorium to house children who were infected with tuberculosis. The sanatorium was a very important piece of the puzzle in the fight against tuberculosis in the region. In 1990, the well preserved buildings were turned into a very modern Hotel and conference centre. Today Hotel Koldingfjord is considered to be one of the best hotels to stay while visiting Kolding, and is an ideal location for well-to-do tourists and businessmen to stay while in Kolding.

13. Danish Nursing Museum (Dansk Sygeplejehistorisk Museum) is located next to Hotel Koldingfjord. The Dansk Sygeplejehistorisk Museum which is dedicated to showing the history of practice of nursing over the last 500 years. The museum is located at Fjordvej 152. The museum is housed in two buildings which were originally a part of the sanatorium. From 1911-1958 these two building were used for the youngest children who were infected with tuberculosis. Tourists can’t help but be slightly annoyed by the overuse of disturbing manikins dressed in historical costumes; however the museum does have some very interesting information related to the history of nursing.

14. Saint Michaels Church (Sankt Michaels Kirke) is another noteworthy church in Kolding. The church is located at 2 Sct. Michaels Gade. Sankt Michaels Kirke is a Roman Catholic gothic style church. The church was built in 1885. However, the church was originally built without a spire due to financial considerations it was only added later when there were enough funds to cover the costs. Today the church spire holds two enormous bells, named Maria (650 kilos) and Clemens (400 kilos). In 1963 the church expanded once again to include 2 aisles.

15. The Botanical Garden (Geografisk Have) is Kolding's 12-hectare botanical garden. Geografisk Have is located on Christian IVs Vej 23. The Botanical Garden is divided into country sections such as, China Japan, North America, and Korea amongst others.  Each section has trees, bushes, and flowers from their respective country. The garden also holds a big section for kids, with playgrounds, rabbits, chickens, goats, sheep’s, donkeys and many different birds which can entertain the children while you explore the Garden. Visitors can enjoy a great meal at the gourmet restaurant “The Golden Roaster” (Den Gyldne Hane) which is located in the Garden.

16. Kolding Mini City (Kolding Miniby) is located in the Botanical Garden (Geografisk Have). Kolding Miniby is a museum which is often overlooked by tourists; however it is one of the most impressive tourist attractions in Kolding.  Kolding Miniby is a project where the town of Kolding has been painstakingly recreated in model form as it was in 1860. To date there are over 250 buildings completed to at the scale of 1:10.  The model buildings are layed out in a display which gives visitors a true sense of life in Kolding in the middle of the 19th century. It also gives visitors a true appreciation for the enormous amounts of time, research and effort which was required in recreating the city of Kolding in model form. Kolding Miniby has its own tile works and carpenter work shop.

17. The Toy Museum (Legetøjsmuseet) is located at 31 Bredgade. The toy museum is a relatively new edition on the Kolding Tourist Map. The museum is popular tourist attraction for children and adults alike.  Visitors to the Legetøjmuseet will be treated with a very fine collection of historical toys such as dolls, cars, trains, teddy bears, games and much more.