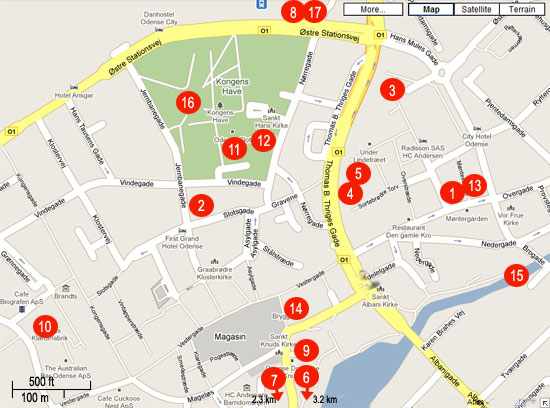 10. Brandts Clothing Factory (Brandts Klædefabrik) was founded in 1869, and it was once one of Odense´s largest workplaces for more than a hundred years. The factory closed in 1977, and the buildings were left vacated for a number of years. In 1980 the architects Kristian Isager and Jørgen Stærmose redesigned the empty buildings. Today the buildings are used for a variety of different activities within art and culture. Today the old clothing factory has several trendy restaurants, shops and museums.

The Museum of Photography (Museum for Fotokunst). This museum displays temporary exhibits of by Danish and foreign photographers.

Denmark´s Media Museum (Danmarks Mediemuseum) has living a workshops displaying graphical fields, and newspaper development throughout the past 300 years.

11.  Odense Castle (Odense Slot). A part of the castles buildings are from the originally Saint Hans Monastery (Skt. Hans Kloster). The castle functioned as the Kings residence when he came to Odense. The current main building was built in 1720, and it was rebuilt in 1841.

12. Saint Hans Church (Sankt Hans Kirke) was originally the Church of the Johanniter Monastery (Johanniterkloster Kirke). After numerous changes throughout the Middle Age, and in the 18th century the church now appears as a gothic church with a Romanesque baptismal font from the 11th century, and a baroque altarpiece from 1715.

13. Overgade (Overgade). Many houses on this street are well preserved, and a many of them are actually tied to The City Museum - Møntergården (Bymuseet Møntergården). The two merchant's houses on the street `Overgade (number 19)` are certainly worth a visit. The oldest timber-framed house in the area was built in 1570. This building was once a school which was attended by H.C. Andersen.

14. The City Hall Square (Rådhuspladsen). This central and monumental square is called Falk Haven (Falkhaven). The Town Hall, and The Cathedral Sct. Knud´s Church are located in this square. The Town Hall built which was built in 1883 is a great example of the architecture at the time.

15. Odense River (Odense Å). The 54 kilometre long river is the longest on the island of Funen. The river runs through several towns, and it is surrounded by my parks, and other noteworthy scenery. In the fall the sea trout swims to the upper part of the river to spawn. All along the river there are many places to rent fishing equipment, kayaks, canoes and other water craft.

Odense - Things to See and Do (Part 1)
Odense - Main Page