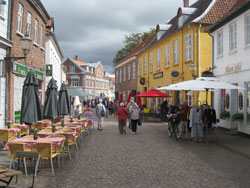 Ribe is the oldest town of Denmark, situated in southwest Jutland. Until 1 January 2007, it was the seat of both the surrounding Municipality, and County. Ribe is now part of the enlarged Esbjerg Municipality newly created Region Syddanmark.

Established in the first decade of the 8th century and first mentioned in a document dating from 854, Ribe is the oldest town in Denmark.

When Ansgar the Archbishop of Hamburg-Bremen, set out on the "Mission to bring Christianity to the North", he made a request in 860 to the King of Denmark, that the first Scandinavian church be built in Ribe. This was not coincidental, since Ribe already at that point, was the most important trade city of Scandinavia.

However we can only confirm the presence of a bishop and thus a cathedral in Ribe from the year 948. The town has many well-preserved old buildings. 110 houses are recognized under Danish Heritage Protection laws. Denmark's oldest town hall is found on the town's Von Støckens Plads. The building was erected in 1496, and was purchased by the city for use as a town hall in 1709.