Viking burial customs did not alter much during the Vikings Age until Christianity took over as the main religion. Burial customs did have subtle differences from region to region. TheVikings worshiped pagan gods and buried their dead in accordance with these pagan rituals. The dead were buried with a variety objects and we can only assume that this was done for religious reasons. The objects which have been found in Viking graves are now an invaluable source of information about the daily life of the Vikings. 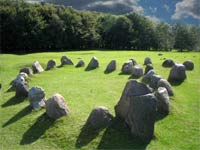 Two different types of burials were used; cremation andinhumation. The dead were burnt or buried in their daily clothes, and are usually buried along with his or her personal belongings. Sometimes the dead were buried lying in a boat or a wagon. Archaeologists assume that this means that a form of transportation was deemed necessary for the dead to travel to the next world. Some Viking graves contain horses; this could also be a method of fulfilling the transportation needs of the dead. The burial of horses appeared to be most common in Denmark and the Birka region in Sweden.

However, it does seem that the funeral boat or wagon in some regions of the Viking World was a practice which was reserved for the wealthy. This could be a way to express the status and importance of the dead.

Cremation was the more common of the two burial practices in the early Viking Age. The vast majority of the major burial finds throughout the Viking world are cremations. Inhumation was practiced in some regions throughout the entire Viking Age, particularly in Southern Jutland. During the late Viking Age, around the year 1000, Christianity began to take over as the main religion of the Vikings. This religious change seems to have affected Viking burial practices. Inhumation began to replace cremation as the method of delivering the dead to the afterlife.

Different regions had different customs. For example: Lindholm Høje in Denmark is one of the most impressive Viking burial sites open to visitors, and many of the graves are marked with stones in the shape of a ship. While the Vikings from central Sweden generally laid the stones out in circular or triangular patterns.

Viking graves have shown us that human sacrifice was not unknown during the Viking Age.