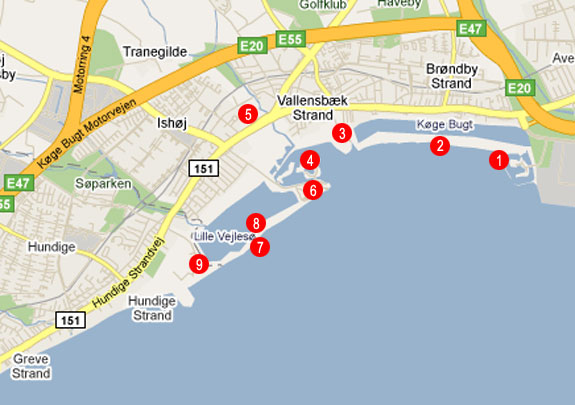 2. Broom House (Gyvelhuse). Gyvelhuse is the site of 8 stone sculptures which were made by the Danish artist Henry Heerup (1907-1993). The sculptures are scattered in the grassy dunes.

5. Big Vejle Stream (Store Vejleå). During the winter months Big Vejle Stream (Store Vejleå) is a very popular spot for fishing. Each winter the large perch swim up the stream in order to spawn. Fishing passes are mandatory in Denmark for everyone between the ages of 18-65. Day, month and year long passes can be purchased at Sport Dress phone number (+45) 38 88 46 48 or at the Q8 gas station placed on the street ‘Gammel Køge Landevej’.

6. The Ark, Museum of Modern Art (Arken, Museum for Moderne Kunst). The architect Robert Lund designed this elegant modern art museum and it first opened in 1996. The building is an artwork in its self. The museum has many temporary exhibitions of paintings, sculptures and graphic arts. There is also a decent permanent exhibit.

7. The Hunting Pier (Jægermolen). Jægermolen is one of the beach park’s best known buildings; it is built of big beautiful stones from which were imported from Skåne, Sweden.

8. The Hunting Lake (Jægersø). Jægersø is the home of many different types of birds, such as coots, grebes, black-headed gulls amongst others. The swamp is an ideal breeding ground for the birds.