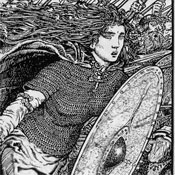 In the History Channel series Vikings, we meet the character Lagertha who was the first wife of Ragnar Lothbrok. She is portrayed as a "shield-maiden"..., a female warrior who fights alongside with men. Shield-maidens were legendary as women who had chosen to fight alongside men.

Shield Maidens appear in many Norse and Viking legends, although there is very limited historical evidence that they existed. Some shield maidens mentioned in the Norse legends include Lagertha of course, as well as Brynhild, Hervor and Thornbjörg.

Shield Maidens are mentioned in the reasonably contemporary account of the Byzantine historian Skylitzes who reports that women participated in the Battle of Kiev in 971.

The story of Lagertha is more difficult to confirm than is the existence of Ragnar. She is mentioned in the works of the 12th Century Danish historian Saxo Grammaticus. His story recounts that Lagertha fought alongside Ragnar in a battle against the Swedish king Frø. The battle was to avenge the death of Ragnar's grandfather Siward.

Although there is little written material to confirm the existance of shield-maidens, there have been a number of Viking graves found which contain the remains of women and weapons. Vikings were known to bury their dead along with their possesions, and this at least is suggestive of at least some Viking women taking up arms.

Additionally, DNA evidence suggests that the Viking invasion of England included roughly equal numbers of men and women. If this is true, then it seems reasonable to believe that Viking wives traveled with their husbands on the voyages of settlement and conquest.

Finally, there are many examples of women fighting alongside men in more recent times. All in all, it seems likely that at least some Viking women took up arms, and that the character of Lagertha reflects this truth.