Home > The Vikings > Ragnar Lothbrock - Scourge of England and Normandy 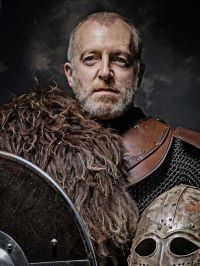 As featured in the History Channel series "Vikings", Ragnar is a farmer who believes there is land west of Iceland. He is credited with the first raids on England. The TV series clearly places Ragnar in Norway based on the geography shown, and mixes elements of history and myth.

In fact, Ragnar Lothbrock (sometimes called Ragnar Lodbrok or Lothbrok) was a legendary Viking figure who almost certainly existed, although the Ragnar in the Viking Sagas may be based on more than one actual person. The real Ragnar was the scourge of England and France; a fearsome Viking warlord and chieftain. One highly probably link is to the real life character Ragnall.

Ragnar's death has been placed as occurring in 840 or 865. Danishnet subscribes to the theory that the later date is more likely. This would mean that Ragnar was probably born around 820 AD. He was a pirate and a raider who was later eclipsed in fame by his sons, Bjorn Ironside and Ivar the Boneless. The sons may have been adopted as this was a common practice by Vikings during the period. If they were adopted, this may have come about as a result of the death of their biological parent, or perhaps as a means of ensuring dynastic control. (This is similar to the Roman practice where Emperors adopted their preferred heirs)

Vikings had raided England and Scotland since the late 700's. Ragnar was by no means the first to raid England. It seems however that he may have been the first to leave settlements and attempt to control areas of land, rather than simply plunder and leave.

The Vikings had also been raiding what is now France since at least 800. In 845, "Ragnall" sailed south with a large force said to include 120 ships and 5,000 men. He presumably navigated up the Seine river, and ravaged and plundered the western part of the Frankish Empire including Rouen. The story of Ragnall seems conflated with Ragnar and it is likely that these are the same person.

Interestingly, Rouen was the capital of Normandy, and it was controlled from 911, by Vikings who pledged allegiance to the French crown. In other words, the Normans who conquered England in 1066 were largely of Viking origin.

In 845, Vikings laid siege to Paris. The Vikings were partly pagan and partly Christian by this time, so accordingly the attack was preceded by prayer to the old Norse Gods, and a fast for the benefit of the Christian one. The Vikings defeated the army of Frankish King Charles the Bald and withdrew only after payment of 7,000 pounds of silver. (an immense amount of money during the period)

Ragnar was a powerful Lord, under Danish King Horik II. Although the visual backgrounds of the  TV series appears to place him in Norway, it is more likely that he was from Denmark or Sweden.

All sources agree that Ragnar died in England, although the legends of the cause of his death vary. In one story, he is killed by the Northumbrian King Ælla when he is thrown into a pit os venemous snakes. In another, he is murdered in East Anglia after befriending Kind Edmund. Although the date is sometimes given as 840, that seems unlikely as the Viking invasion of England by Ragnar's sons takes place in 865.

Although the historicity of Ragnar has been challenged and debated, it is important to note that he is mentioned in the Anglo-Saxon Chronicle. The Chronicle was first compiled around 890 AD and is widely considered to be a relatively accurate telling of Anglo-Saxon history. As this would only be some 50 years previously, it would seem we can rest certain that there was a much feared Viking Chieftain by that name. With that said,, it does appear that certain stories have been attached to Ragnar which are actually about other Viking leaders.

Our major sources for information about Lothbrok are the 12th Century Gesta Danorum recorded by Danish Historian Saxo Grammaticus and Krakumal, an Icelandic poem that offers a romantic version of Ragnar’s death.

Whatever the case, we do know that the "Great Heathen Army" led by three sons of Ragnar's landed in 865 and commenced a 14 year long war against the small Saxon Kingdoms (Heptarchy) of 9th Century England. It is possible that the invasion may have had to do with avenging the murder of Ragnar. An alternative and probably better theory holds that the invasion was to retake lands previously claimed by Ragnar. As was common Viking practice, the invaders were more than willing to be paid off to attack some other group. The story is told that the King of East Anglia gave the Vikings horses in return for their agreement to attack other kingdoms.

In the television series, Ragnar's wife is Lagertha, a "shieldmaiden" who fights alongside the Viking men. There are few historical references to actual shieldmaidens, but it certainly is reasonable to believe that this at least occasionally occurred. There are other examples of women fighting alongside men in other cultures. There is however little evidence for the existance of a real Lagertha. Rather, the sagas refer to his wife Lathgertha, who may represent the Nordic goddess Thorgerd.

The series also portrays Rollo as Ragnar's older brother. In fact the real Rollo was not related to Ragnar and almost certainly never met him.

On the whole, the television series is great fun, but viewers should explore some historic sources to learn more about the Viking era.