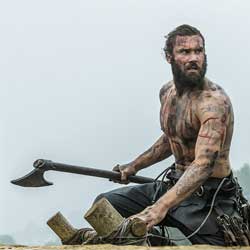 Count Rollo is a character in the History Chanel's TV Series Vikings. He's also a 100% REAL historic figure (although the TV Series contains a number of inaccuracies)

The biggest inaccuracy is simply that Rollo was not the older brother of Ragnar Lothbrok. Indeed, there is no reason to believe they were even remotely related or that they ever met. This has been added into the TV scripts presumably because someone thought it made the character more interesting. We beg to differ. The real life Rollo is an extremely important figure in Viking History and mythology.

The real Rollo was the first ruler of Normandy and the "Normans". His descendant William the Conqueror invaded England in 1066 as the leader of the Normans and took control of the country following his victory at the Battle of Hastings. In fact, Rollo is related to many of today's European Royal families.

Unfortunately, like much Viking history and medieval European history in general, Rollo's early years are not well documented. He was born around 845, most probably in Denmark. Based on our best guesses about Ragnar's birth that would mean Ragnar was perhaps 20-25 years old when Rollo was born. On the television series Rollo is said to be Ragnar's older brother. To repeat..., Rollo wasn't related to Ragnar.

The Vikings had been raiding in what is now France since at least 800 AD. As in England and Scotland, they were more than willing to be bought off. Warfare and pillage were simply business as usual in the Viking world.

The best early mentions of Rollo relate to his leadership of the Vikings who besieged Paris in 885-886.

A formal and "official" biography (Historia Normannorum) of Rollo was written in the period roughly 995-1010 by Dudo of Saint-Quentin. It seems certain that Dudo had access to Rollo's family members, but this also poses the probability that some of his accomplishments are exagerrated.

According to Dudo, Rollo captured the city of Rouen in 876. Rouen was the Capital of Normandy and Rouen became the base of Rollo's nascent Norman Duchy. By 880, he had expanded his holdings to include Bayeux. History records that he carried off and married Poppa of Bayeux sometime around 886. It may be that Rollo captured Bayeux more than once and was paid off to withdraw.

In 918, there is a specific mention of "Rollo and his associates" as the "Normans of the Seine". By virtue of the Treaty of Saint-Clair-sur-Epte signed in 911, France's King Charles III (Charles the Simple) had "permitted" the Normans to settle in their lands in return for defending France against invasion by other Northmen.

This is actually typical of many treaties and agreements of the feudal period. It's unclear who would have won in a war between Charles and the forces of Rollo. Instead, the treaty recognized the reality on the ground and resulted in stability.

In 911, Rollo had attacked Paris and then laid siege to Chartres. Later that year Rollo was defeated by the combined forces of Neustria, Burgundy, and Dijon. Charles III then negotiated with Rollo and granted him the right to the land corresponding to today's upper Normandy, in return for Rollo's assistance in protecting Charle's Kingdom. At that time, Charles was attempting to cement control of Lotharingia and West Francia (corresponding roughly to current day France).

One intriguing note regarding the television series. Rollo is portrayed as a large and powerful man. Multiple Icelandic and Viking sources suggest that the true Rollo was an extremely big man..., too big or heavy to ride a horse and hence called "Gaange Rolf"...  which translates roughly to "Rolf the Walker".

Rollo died c. 930 and is buried in the Cathedral of Rouen.

Dudo of St. Quentin, History of the Normans. ed. and trans. Eric Christiansen. Woodbridge, Suffolk: The Boydell Press 1998
Robert Ferguson, The Hammer and the Cross: A New History of the Vikings Penguin Adult 2009