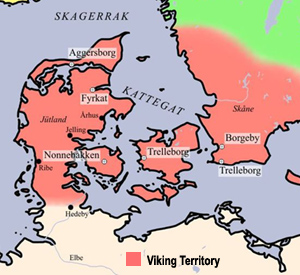 Trelleborg is the word for a Vikings Ring Fortress or a Viking Castle. 10th century Danish ring castles are one of the clearest evidence of a centralized power structure in Denmark’s late Viking Age.

There are seven such fortresses known, however there are most certainly more to be found:

Most of our knowledge of these types of fortress comes from Trelleborg in Slagelse, and Fyrkat by Hobro. Both of these Trelleborgs have been the subject of extensive excavations. Both facilities are very similar in their layout. Both are circular fortresses and the ramparts are made of wood and soil. There are four gates into the fortress, and the gates are connected to each other by wooden blocked streets, which intersect at the center of the fort.

Excavations at Fyrkat have shown that certain buildings were used for habitation, while others were used as workshops for both blacksmith and jeweller (goldsmith). Women and children were buried just outside of the ramparts.

Tree ring dating of the timber used to build the houses from Trelleborg (near Slagesle) shows that the houses here were built of wood harvested around 980 AD. This is during the reign of Harald Bluetooth (Harald Blåtand). Dating of wood from the gates of Fyrkat (near Hobro) gives similar results. Since there is no trace of any kind of repair to either fortress it can be assumed that neither fortress was in use for any longer than 20-30 years.

The construction of these ring castles must have required careful planning and considerable engineering skills. With all known Trelleborgs geometrical symmetry was very important in the construction. The basic architectural plans of all of the Trelleborgs have such similarities that they most likely can be attributed to one single sponsor’s authority, and all the evidence points towards King Harald Bluetooth (Harald Blåtand).

Historians and archaeologists once assumed that these fortresses were purely military installations. It was once believed that the Trelleborg near Slagesle housed Svend Forkbeard’s (Svend Tveskægs) army before the invasion of England in the early 11th century. This is no longer the believed function of these fortresses.

It is now assumed that these types of facilities were used as centers for the royal administration. These fortresses were places where collected taxes could be kept, and also bases to control the local populations. The short life and rapid abandonment of these fortress shows that political change at the end of the 10th century must have made them unnecessary.