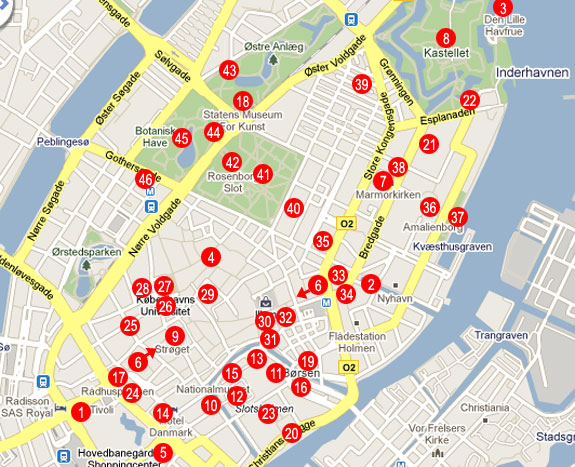 33. The King’s New Square (Kongens Nytorv). Kongens Nytorv is at one end of Copenhagen’s main pedestrian street Stroget (Strøget). The square is an enormous open space and it is surrounded by some of the more opulent building in the city; such as The Royal Danish Theatre (Det Kongelige Teater), Charlottenborg Palace, The French Embassy and the famous Hotel d'Angleterre. The square was constructed in 1670 by King Christian IV, and it is his statue which sits in the centre of the square. A short distance from The King’s New Square is the New Harbour (Nyhavn).

34. The Royal Danish Theatre (Det Kongelige Teater). Erected in 1874, The Royal Danish Theatre was designed and built by Vilhelm Dahlerup in the Renaissance style. The Theatre is still active and is known to put on a variety of types of performances, from ballet, opera, classical music and dramatic performances. In front of the theatre’s main entrance there are statues of Adam Oehlenschläger and Ludvig Holberg who are 2 of Denmark’s most influential writers and playwrights. The lobby and the main hallway leading into the theatre are covered with many beautiful paintings and sculptures. The Kongelige Teater hall holds 1.500 people, and the decorations on the ceiling were made by Constantin Hansen (1804-1880).

35. Baron Boltens Farm (Baron Boltens Gaard). There are two entrances into this interesting courtyard. In the courtyard there are many small stores, restaurants and cafés. One of the entrances to old farm is on the street ‘Store Kongensgade’ and the other is on ‘Gothersgade’. The farm was built by the winemaker Henrik Bolten 18th century.

38. The Russian-Orthodox Church (Den Russisk-Ortodokse Kirke). Many would be surprised to know that Copenhagen is the home of a Russian-Orthodox Church . However, historically Denmark and Russia have had a strong relationship. Den Russisk-Ortodokse Kirke was built in 1883 with financial support from the Russian Tsar Alexander III. The Tsar was married to the Danish Princess Dagmar at the time. Unfortunately access to the church is only granted in connection with official Church ceremonies, tourists are not welcome inside.

39. Nyboder (Nyboder). These yellow houses are thought to be the first purpose built row-housing project in the world. The houses were built between the years 1631-1641 by King Christian IV. The original purpose of the row-houses was to provide homes for the men in the Danish Navy. On the street ‘Skt. Paulsgade’ there is an interesting little Museum called Nyboders Memory Rooms (Nyboders Mindestuer). The Museum displays how the officers and their families lived in and around 1880’s. The Museum is open Wednesdays and Sundays.

40. The David’s Collection (Davids Samling). The building is a beautiful estate home which was built in 1807 for Captain J.C. Krieger. The building is today the home of Davids Samling which is a relatively decent art museum in Central Copenhagen. The museum is highly respected for its unique collection of Islamic art from 7th century all the way to the 18th century. The museum also holds a collection of fine art of Europe from the 19 century, and many artefacts from the ‘Danish Golden Age’ (Den Danske Guldalder) as well as a small collection of very early pieces of Danish Modern Art. The Supreme Court lawyer Christian Ludvig David founded the Museum. The museum is located on the street Kronprinsessegade, and this street holds some of the most beautiful houses in all of Old Copenhagen. Entrance is free to the Davids Samling Museum.