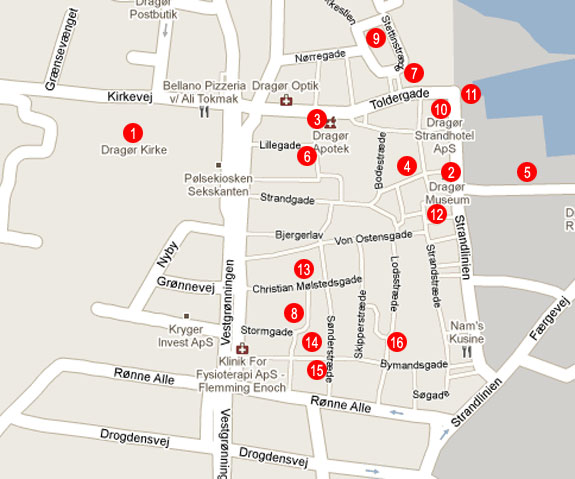 9. Stakhaven (Stakhaven). Stakhaven is an undeveloped area which has been the site of many exciting archaeological find. Scattered remains from middle-aged buildings have been found.

10. Dragor Beach Hotel (Dragør Strandhotel). The Dragør Beach Hotel is a hotel near the coast. The present buildings date back to 1845, however there were substantial renovations done in 1930. The hotel is on the site of the former herring market from the Middle Ages. The market was covered by a wooden shelter.

12. Beach Street (Strandstræde). On the street ‘Strandstræde’ there is an interesting home (number 8) which was designed by Johan Hendrich Jørgensen Blichmann for the bakery owner Peter Troch-mann. You can still see the initials PTM on the wall.

14. Blegerstræde (Blegerstræde). Blegerstræde is a street in the old section of Dragør. Several families who lived on this street made a living out of bleaching fabrics (the ‘blege’ in Blegerstræde means ‘bleach’). Many of the high-end stores in Copenhagen use to have their fabrics such as tablecloths and beddings bleached here. In the beginning of the 20th century the department store Magasin alone shipped 6000 rolls of fabrics to Dragør every year to be bleached in the sun. Each roll was approximately 40m long. The bleaching would take 2 month. The house number 12 is a typical bleaching house. It’s built high to leave room for the tall barrel which was used to cook the fabrics before bleaching. After cooking the fabrics would be rinsed in the sea before they were laid out to be dried in the sun.

16. The Bailiff Square (Fogends Plads). The second last bailiff of the town ‘Isbrandt D. Smidt’ lived in the house number 7. His residence (number 2 is very typical of a skippers home from the 18th century.