Danishnet is fond of the History Chanel's TV series "Vikings". Although the series can't be treated as historically accurate, it does contain much that is true and has increased interest in Viking history and culture. A main character in the series is Björn Ragnarson 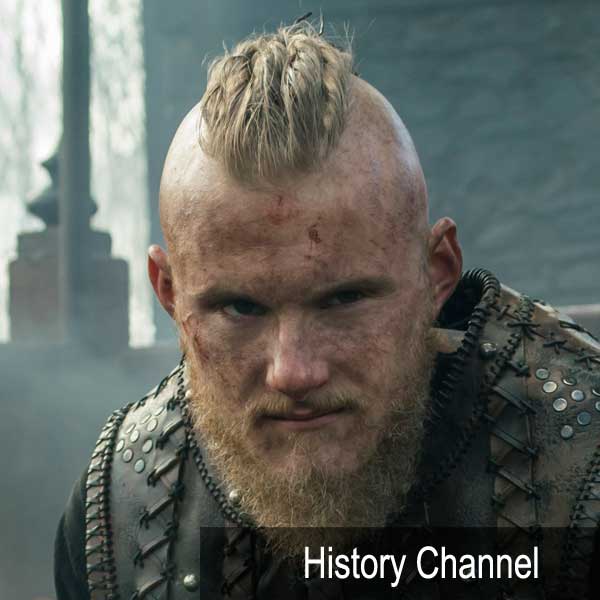 Björn Ironside is without doubt a real character from the Viking period..., a successful warlord and leader. He is sometimes reputed to be the founder of a Swedish Royal Dynasty that ruled over that country until 1060.

According to The Saga of Ragnar Lodbrok and His Sons , Bjorn Ironside was the son of Ragnar Lothbrok and Aslaug. Bjorn was the second son. There was also the oldest brother, Ivar the Boneless, and two younger ones, Hvitserk (which may have been a nickname of Halfdan Ragnarsson) and Sigurd Snake-in-the-Eye.

It is possible that the sons were adopted. This was a common practice by Vikings during the period. This could come about as a result of the death of a biological parent, or perhaps as a means of ensuring dynastic control. (This is similar to the Roman practice where Emperors adopted their preferred heirs)

Yes. He is first mentioned in 855 and appears in contemporary sources, the Annales Bertiniani and the Chronicon Fontanellense. Unfortunately. the earliest texts that describe his parentage and heritage date from around 1070.

We know that Björn cooperated with another Viking leader to sail up the Seine river in 855 and fought against the forces of Charles the Bald. Although defeated, the defeat was not serious enough to result in Ironside's retreat. Instead, he took control of the island Oissel near Rouen, and constructed a fortress at that location. The French under Charles the Bald were unable to dislodge Ironside's forces.

By 858, Ironside swore fealty to Charles the Bald. This was not uncommon during this period of Franco-Viking history. Viking raiders would seize control of an area and prove extremely difficult to remove. In time, the Vikings would come to a "working agreement" with the French kings that could be summed up as "We promise to respect you as our Lord, and you promise that we can keep the land."

Around 858, Björn joined with Hastein to create a raiding fleet to round Spain's Atlantic coast and  enter the Mediteranean Sea. The expedition was most likely inspired by stories of the riches of the Moors, the Spanish, and most particularly Rome. The expedition met some success, but was was also defeated in a number of encounters. However, in 861 the expedition successfully raided Pisa, and Luna in Italy.

It's interesting that the story is told that the defences at Luna were very strong and that Ironside ultimately gained access to Luna by pretending to be dying and requesting conversion before his death by the Bishop of Luna. (Ironside and Hastein may have mistakenly believed that they were at Rome.) Viewers of the Vikings TV series will recognize that this story was attributed to Ragnar.

By 862, Ironside appears again in the Seine valley of France.

Anglo-Saxon sources report that Ironside's father Ragnar Lothbrok died in what is today's England. In one story he is killed by King Ælla when he is thrown into a pit of venemous snakes. In another, he is murdered in East Anglia after befriending Kind Edmund. Although the date is sometimes given as 840, that seems unlikely as the Viking invasion of England by Ragnar's sons takes place in 865.

In 865, the "Great Heathen Army" led by three sons of Ragnar (Ivar, Ubbe, and Halfdan) landed in 865 and commenced a 14 year long war against the small Saxon Kingdoms (Heptarchy) of 9th Century England. It is possible that the invasion may have had to do with avenging the murder of Ragnar. An alternative and possibly better theory holds that the invasion was to retake lands that had been claimed by Ragnar. Björn is not mentioned in the Chronicle of this invasion, but later tradition suggests he may have participated.

If he did not participate, could that be confirmation of the sage that tells us that Björn inherited Swedish territories on the death of Ragnar? Possibly, but there are no known contemporary records that confirm this.

Like much of Viking History, the story of Björn Ironside is a mix of references and hints within histories and chronicles of the time, combined with myths and legends found in various Icelandic and Norse sagas. What we can say with confidence is that he was a significant and successful Viking leader in the period 0f roughly 855-862. He was well enough known to be added into the sagas, where his legend may well have been expanded upon.