Home > The Vikings > Ivar the Boneless 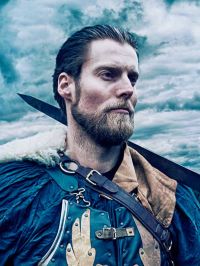 According to The Saga of Ragnar Lodbrok, Ivar the Boneless was the son of Ragnar Lodbrok and Aslaug. (Ivar Ragnarsson). It is possible that Ivar was adopted as this was common practice for Vikings at this time. This might come about as a result of the death of their biological parent, or perhaps as a means of ensuring dynastic control. (This is similar to the Roman practice where Emperors adopted their preferred heirs)

The History Channel's series "Vikings" hews to the myth that Ivar's "bonelessness" was the result of a curse. His mother Aslaug was a shaman (similar to a witch). When Ragnar returned from a long raiding trip to England, Aslaug said that they must wait for 3 days before consummating their marriage. Ragnar wouldn't wait and as a result Ivar was born with weak bones. The series portrays Ivar as disabled, although this seems unlikely for the period.

In fact, we have no idea what the derivation of the name is. A number of the sagas refer to him as being "boneless". One suggestion is that he may have suffered from osteogenesis imperfecta (brittle bone disease). It has also been suggested that he might have been impotent although we know of children that were supposed to be his as a result of marriage. Whatever the case, he is described as a large man, and a dangerous and powerful warrior. He is also described as a berserker..., a particularly vicious tuype of warrior in the Viking world. It may be possible that he was a particularly agile and flexible warrior (hence boneless).

In 865 Ivar and his brothers led a coalition of Viking warriors in the invasion of England. The native Anglo-Saxons referred to the invaders as the "Great Heathen Army". The timing of the invasion was good as Northumbria was in the middle of a civil war. Although the combatants agreed to collaborate to fight the Norse invaders, valuable time was lost in bringing their forces together.

Thus commenced a 14 year long war against the small Saxon Kingdoms (Heptarchy) of 9th Century England. It is possible that the invasion may have had to do with avenging the murder of Ragnar by Ælla of Northumbria who had supposedly executed Ragnar in 865 by throwing him in a snake pit.

An alternative and probably better theory holds that the invasion was to retake lands previously claimed by Ragnar. As was common Viking practice, the invaders were more than willing to be paid off to attack some other group. One story declares that the King of East Anglia gave the Vikings horses in return for their agreement to attack other kingdoms.

In 866, the Viking army turned north to invade Northumbria. In 867, they captured the city of York and its ruler Ælla. Ælla was executed and the Viking forces turned south again, ultimately capturing Nottingham. The Vikings appear to have been paid to leave in late 868, but they returned the following year.

One story tells us that Ivar then left the English territories under the control of his brothers Halfdan and Ubbe, and carried on to Ireland. Some scholars identify Ivar as Imar, who at various times ruled Northumbria from York, and dominated the Irish Sea from the Kingdom of Dublin.

Along with Olaf the White, his co-ruler in Dublin, he launched a two-pronged attack on Scotland, they met up at Dumbarton Rock the 'fortress of the Britons', which they besieged. The garrison of the rock held out for four months. They cut off the water supply and having 'Wasted the people who were in it by hunger and thirst', the defenders capitulated after which the fortress was pillaged and destroyed. Ivar and Olaf remained in Strathclyde for the winter, and then returned to Dublin loaded with booty and slaves. The Vikings then exacted tribute from Constantine I, King of Scots.

A different story informs us that Ivar was buried in Northumbria in 870 sometime after his death from unknown causes. Unfortunately, this replicates a common problem in following the history of the Vikings. Many of the written histories are provided by their victims, who were unfamiliar with the intricacies of Viking Society. We do know that Ivar is a real character..., a Viking leader known for his cruelty and success in battle.

Ivar disappears from the historical records around 870. His death is recorded as either 870 or 873. The Irish records specify 873.

Was Ivar King of Kattegat?