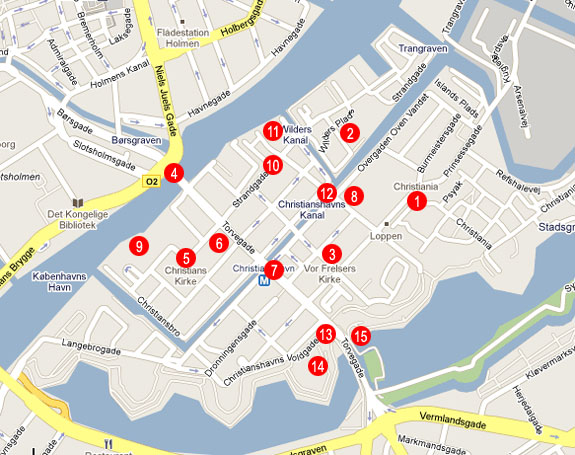 1. The Freetown Christiania (Fristaden Christiania). Freetown Christiania is a world famous ‘Free Town’ right in the heart of Copenhagen. Originally there were military barracks on the site of the town, but the barracks were left empty in 1971. The barracks were soon occupied by swarms of young people who wanted autonomy from the Danish Government. The Danish Government made the decision to allow these young people to continue living there and they legalized the Free Town. Christiania is the second most visited attraction in Copenhagen behind Tivoli Gardens, and visitors to Copenhagen should find time to see this very unique social experiment in action. Christiania contains houses, workshops, good restaurants, pubs and several concert venues. There are only approximately one thousand people who actually live in Christiania. Every weekend there are guided tours. The tours start by the Gallopperiet by the main entrance on the street ‘Prinsessegade’.

3. Vor Frelsers Church (Vor Frelsers Kirke). Vor Frelsers Church was built in the year 1682. The Church was built in the Dutch baroque style and it was designed by the Dutch architect Lambert Van Haven. In 1752 the very unique spire you see today was added to the structure. The spire was designed by the architect Laurids de Thurah. The spire is 86.6 meters tall, and it is one of the highest in Copenhagen. There is free entrance into the church, but there is a small cost to go up the tower. The tower is has a great view of the Copenhagen skyline.

4. Knippel Bridge (Knippelsbro). Knippel Bridge is an impressive bascule bridge with tall copper coated bridge towers. There have been many bridges on the site. The present bridge was built in 1937 and it was named ‘Knippelsbro’ after one of the original operators of the first bridge. The first bridge was built by King Christian IV in 1618 and the name of one of the first bridge keepers was Hans Knip, so the town’s people called the bridge ‘Knippelbro’ (Knippel’s Bridge).

5. Christians Church (Christians Kirken) The Christians Church is an attractive rococo styled building which was built in 1759. The Church was designed by the famous Danish architect Nicolai Eigtved. The church was originally built for the many Germans who were living in the area at the time. The church was used exclusively by the German community until 1886. Today the church continues to conduct normal church services, as well as for many concerts and lectures.

6. B&W Museum (B&W Museet). The B&W Museum is a museum which tells the story of the evolution of ships and ship engines made by the Burmeister & Wain ship building company. The museum is housed in an enormous storage building which was built in 1789. These huge storage buildings can still be seen in many places in and around Copenhagen, and they remind us of just how important the trading ports have been in the development of the city.

8. The War Museum (Orlogsmuseet). The War Museum tells the story of the Danish Navy all the way back to 1650. The museum has an impressive display of incredibly detailed ship models. There are also many uniforms, weapons and plenty of other seafaring artefacts. The museum is housed in a building which was built in 1755. There is a museum store which sells souvenirs and books about the Danish Navy and sea transport and trade.