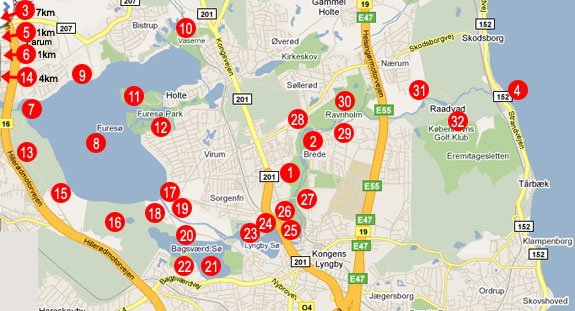 25. Lyngby Mill (Lyngby Mølle). There’s been a mill here since 1492. The original corn mill was converted into an industrial mill in 1640. The converted mill was used to produce rifles for the Danish Army. Today the mill is used as a museum, which is dedicated to telling the history of the mill. The mill is still functional after over 500 years.

26. Sorgenfri Castle (Sorgenfri Slot). Was originally built as a country home for the Count Carl Ahlefeldt in 1706. It was designed by the French architect Francois Dieussart. The Danish Royal Family took ownership of the castle in 1730, and added the stable buildings. The architect Peter Meyn rebuilt the main building in 1790. The public has access to some parts of the castle.

28. Oerholm Works (Ørholm Værk). Was originally built as a gunpowder mill, and functioned as one up until 1724, when the mill was turned into a copper and iron producer. From 1793 until 1921 there was also a paper factory at the mill. From 1935 until 1977 the factory produced wool blankets, and spring mattresses.

30. Ravneholm Forrest (Ravneholm Skov). Mainly a beech forest which has the odd nickname, ”The Danish Switzerland” (Det Danske Schweiz). The nickname comes from the hilly terrain and the steep hillsides which are around the section of the Millstream. An interesting mushroom like truffle grows at the foot of the Forrest.

31. Stampen (Stampen). Stampen is the oldest known corn mill in the area. The first mill dates back to 1282. The mill has been rebuilt many times, and the last rebuilt took place after the mill burned down in 1914. The current building is used as a wool-spinning mill.

32. Raadvad (Raadvad). Was originally built in 1643 as an industrial mill to produce weapons and farming tools. The Hardware Dealer Association (Isenkræmmerlauget) in Copenhagen turned the mill into a producer of kitchen wares, mainly kitchen knives. Raadvad Knife Factory (Raadvad Knivfabrik) was closed in 1973, and turned into The Raadvad Centre (Raadvad Centret). The Centre is used as a conference centre for craftsmen, and building preservation.